Andrei Cherny is CEO of Aspiration, an online financial platform with a conscience that is founded on the idea that we can do well and do good at the same time. Aspiration brings to everyone top-rated, sustainable, socially-conscious banking and investing accounts, trusts it customers to Pay What Is Fair, and gives ten percent of its revenue to charity. It was named one of Fast Company’s 50 “Most Innovative Companies in the World” and in the top 5 most innovative in both Finance and Social Good. Founded in 2014, Aspiration is one of the fastest growing online financial firms in America.

Andrei has worked for nearly twenty years to make the financial system more open and fair. One of Investment News’ “40 Under 40” investment professionals, Andrei has been an advisor to Fortune 100 companies including some of America’s largest financial institutions, a senior fellow at Harvard's John F. Kennedy School of Government and at the Center for American Progress, a Navy reserve officer, and a financial fraud prosecutor. As the co-founder and president of Democracy journal, Andrei worked with then-law professor Elizabeth Warren to launch the fight for what became the Consumer Financial Protection Bureau. 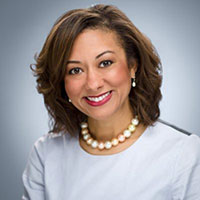 Micaela Fernandez Allen was the Special Assistant to the President in the Office of Legislative Affairs at the White House under the Obama Administration. At the White House, she developed and executed strategies and partnered with multiple federal agencies to further President Barack Obama’s legislative agenda. She currently serves as Director of Global Public Policy at Walmart, managing policy issues and relationships with policy makers and key stakeholders to further Walmart’s business priorities. She is presently focused on enhancing Walmart’s reputation and supporting Walmart’s business with a new initiative; the Walmart Policy Lab. The Policy Lab is designed to address major upcoming policy issues and drive proactive programs.

Earlier, Micaela served as an Advisor to Speaker of the House Nancy Pelosi. Her portfolio included convening key stakeholders, traveling with the Speaker and managing overseas congressional delegation trips. Prior to working for the Speaker of the House, Micaela was the Assistant Sergeant at Arms for the U.S. House of Representatives. She began her career in the office of Congresswoman Juanita Millender-McDonald of California.

Micaela serves on the Congressional Black Caucus Foundation, and recently rolled off the Biden Foundation Board of Directors and Congressional Hispanic Caucus Institute Advisory Council.

Alastair Fitzpayne serves as Executive Director of the Future of Work Initiative. Prior to his work at the Aspen Institute, he served as Chief of Staff at the Department of Health and Human Services (HHS) under Secretary Sylvia Burwell. In addition to serving as Chief of Staff at HHS, Fitzpayne also held a number of senior roles at the Department of the Treasury during the Obama Administration, including Deputy Chief of Staff and Assistant Secretary for Legislative Affairs. He has also served on Capitol Hill, in both the Senate and the House, as an economic advisor to Sen. Evan Bayh and Rep. Rahm Emanuel, respectively. He has also worked at the Office of Management and Budget and Abt Associates, a public policy consulting firm.

Christy Goldfuss, former managing director of the White House Council on Environmental Quality (CEQ), rejoined the Center for American Progress as the organization’s senior vice president for Energy and Environment Policy. As managing director, Goldfuss helped develop and implement the Obama administration’s environmental and energy policies, including the Climate Action Plan, then-President Barack Obama’s major initiative to combat climate change. She co-chaired the Council on Climate Preparedness and Resilience and identified priorities for protecting the country against the worst impacts of climate change.

While leading the CEQ, she advised on the creation of the National Environmental Policy Act climate guidance and testified repeatedly in the U.S. House of Representatives defending it. She also coordinated policy discussions on ozone pollution levels, the review of the coal leasing program, and conservation finance, to name a few.

During Goldfuss’ time at the White House, she served as co-chair of the National Ocean Council, where she worked on a wide variety of issues. She oversaw the completion of the first federal seafood traceability regime to prevent illegal, unreported, and unregulated fishing. She advised on the completion of the first two regional marine plans in New England and the Mid-Atlantic and assisted in collecting community input for the Northeast Canyons and Seamounts National Monument and Papahanaumokuakea Marine National Monument.

Dan'l Lewin is the president and CEO of the Computer History Museum (CHM). For 16 years prior, he was a Corporate Vice President at Microsoft, last reporting to Microsoft President Brad Smith where led the company’s work in applying technology for public good. His work focused on scalable impact within a portfolio spanning US presidential election campaign and global civic technologies, affordable internet access, environmental sustainability and collaboration with leading researcher and universities on technology policy issues. Previously, he led Microsoft’s global engagement with startups and venture capitalists, business relationships with strategic industry partners, and site responsibility for the company's operations in Silicon Valley. Early in his career at Apple, he was a key member of the initial Macintosh team and thereafter a founder of NeXT, Inc. among other roles. Before joining Microsoft in 2001, he was CEO of Aurigin Systems, Inc., a company that pioneered the market for Intellectual Property Asset Management. Dan’l also serves as Chair of the Silicon Valley Community Foundation, and is a founding Board member of StartX. He is also on the Advisory Council for the Department of Politics at Princeton University. Lewin holds an AB in politics from Princeton University.

Amy Liu is vice president and director of the Metropolitan Policy Program at Brookings and the Adeline M. and Alfred I. Johnson Chair in Urban and Metropolitan Policy. She is a national expert on cities and metropolitan areas adept at translating research and insights into action on the ground. As director of the Metropolitan Policy Program, which Liu co-founded in 1996, she pioneered the program’s signature approach to state and local engagements, which uses rigorous research to inform strategies for economic growth and opportunity. Liu has worked directly on such strategies with scores of public, private, and philanthropic sector leaders in regions around the country, including Chicago, Detroit, Louisville, San Diego, and Birmingham.

Liu also has extensive experience working with states and the federal government to develop policies and strategies to support cities and metropolitan areas. In 2013, Liu served as a special advisor to the U.S. Secretary of Commerce, guiding policy priorities related to trade, innovation, and data. Prior to her work at Brookings, Liu was Special Assistant to HUD Secretary Henry Cisneros and staffed the U.S. Senate Banking Committee’s subcommittee on housing and urban affairs.

Steven Olikara (@StevenOlikara) is the Founder & President of Millennial Action Project (MAP), the largest nonpartisan organization of young lawmakers in the U.S. Working with over 800 policymakers in Congress and state legislatures, MAP is building a new generation of leadership to transcend the partisan divide and strengthen our democracy. A nationally-recognized political commentator, Steven has been featured on CNN, MSNBC, Fox News, NBC News, NPR, Wall Street Journal, Washington Post, USA Today, and other national outlets. He is also co-author of the new book, JFK: The Last Speech, published in 2018. Steven has been named a Global Shaper by the World Economic Forum, a Forbes 30 Under 30, the Millennial of the Year, an Aspen Institute Ideas Scholar, and one of the Most Influential Leaders Under 40 by Washington Life magazine.

Internationally, Steven has advised two multi-platinum recording artists on youth issues and sustainable energy efforts, including the Akon Lighting Africa initiative that has electrified over 1 million homes in Africa with solar power. Previously, he worked at the World Bank and served as Harry Ott Fellow on Coca-Cola’s Environment Team, developing public-private water projects with USAID in Africa. Steven is a frequent speaker on next generation leadership at venues such as the Aspen Ideas Festival, the White House, Harvard Institute of Politics, Yale College, SXSW, and the United Nations.