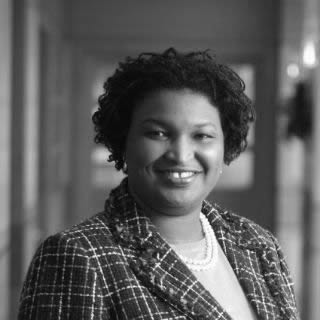 As the House Minority Leader for the Georgia General Assembly, Stacey Abrams was the first woman to lead either party in the Georgia General Assembly and was the first African-American to lead in the House of Representatives.  Her professional experience includes her role as co-founder and Senior Vice President and Chief Administrative Officer of NOWaccount Network Corporation, a financial services firm. Stacey also co-founded Nourish, Inc., a beverage company with a focus on infants and toddlers.

Stacey has been widely recognized for her role as a legislator; her awards include being named as one of 2012’s “12 Rising Legislators to Watch” by Governing magazine and one of the “100 Most Influential Georgians” by Georgia Trend.  For her role in local and state business, she was also named a Champion for Georgia Cities by the Georgia Municipal Association and as Legislator of the Year by the DeKalb County Chamber of Commerce.