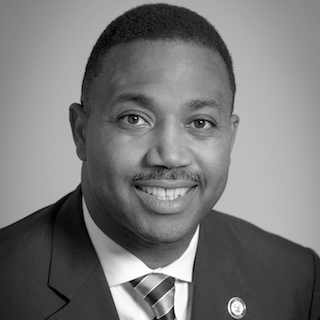 Wesley Bishop is currently serving his first term in the Louisiana State Senate, where he is a member of the Finance, Judiciary, Labor and Audit Advisory Committees. Elected in 2015, he also serves in several leadership roles: 1) Chair, Louisiana Advisory Council on Historically Black Colleges and Universities, 2)Vice Chairman, Senate Governmental Affairs Committee, and 3) Senate Whip and 1st Vice Chair, Louisiana Legislative Black Caucus. He was first elected to the Louisiana House of Representatives in 2011. In addition, he currently serves as Associate Vice Chancellor for Academic Affairs at Southern University at New Orleans. At the age of 29, he was appointed by then New Orleans Mayor and current National Urban League President Marc Morial to serve on the Board of Directors of the New Orleans International Airport - making him the youngest airport commissioner in the country.

After serving as Student Body President and earning a Bachelors of Arts degree in Criminal Justice from Southern University at New Orleans, Bishop earned a Master of Public Administration from the University of Mississippi and a Juris Doctorate from The Ohio State University College of Law. He is also a Fellow of the Harvard University Institute of Higher Education.

During his seven years in the Louisiana Legislature he has been the recipient of numerous awards. In 2017 he was named a Henry Toll Fellow by the Council of State Governments. In 2015 he was named Legislator of the Year by the Alliance for Good Government and in 2013 he received the National Board Award from the Southern Christian Leadership Conference. Lastly, he was chosen by Ebony Magazine as one of the Top 30 Young Leaders of the Future. Wesley lives in New Orleans with his wife, Judge Shannon Bruno Bishop, and their two sons, John Wesley and Justin.