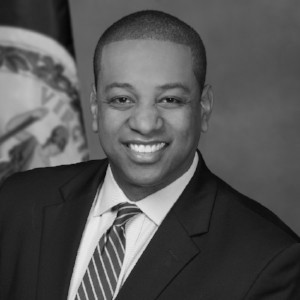 Justin was elected Lieutenant Governor of the Commonwealth of Virginia on November 7, 2017. Justin is only the second African-American in history, and the first in nearly 30 years since the tenure of Governor L. Douglas Wilder, to be elected to statewide office in Virginia. His Inauguration took place on January 13, 2018.

Justin has been recognized as one of the top young attorneys in the nation and a rising star in American politics. He is a prominent and highly successful lawyer, political figure, philanthropist, and a proud husband, father, and community leader. In 2013, at the age of 34, Justin was awarded the National Bar Association’s “Nation’s Best Advocates Award,” which recognizes 40 top attorneys nationwide under the age of 40. He most recently served as a top commercial and white-collar criminal litigator in the Northern Virginia office of the prestigious law firm, Venable, LLP, which he departed in January 2018 to focus on his duties as Lieutenant Governor during his first General Assembly session. He also previously served as an Assistant United States Attorney for the Eastern District of Virginia in the Major Crimes and Narcotics Unit of the Alexandria Division.