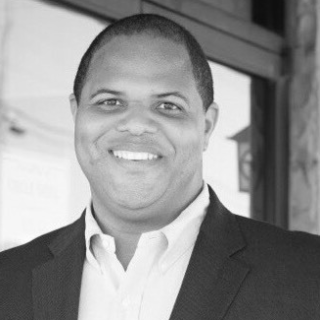 Eric Johnson is currently serving his fifth term in the Texas House of Representatives, where he serves on the Ways and Means and Investments and Financial Services committees; he also serves as the Vice Chairman of the Redistricting Committee.  Johnson was first elected in 2010, at age 34, and was quickly deemed a “rising star” in Texas politics, being named one of the Texas Junior Chamber of Commerce’s “Five Outstanding Young Texans” in 2011.

In 2013, Johnson was named an Aspen Institute Rodel Fellow.  In 2016, he was awarded a Marshall Memorial Fellowship by the German Marshall Fund of the United States and he was also elected to the Board of Directors of the Democratic Legislative Campaign Committee.  Last year, Johnson was selected for membership in the Council on Foreign Relations and was appointed to the Democratic National Committee. Johnson lives in Dallas with his wife, Nikki, and their two sons, William and George.

Currently, Texas has one of the largest unbanked and underbanked populations in the country. A lack of access to financial institutions hinders families from being able to build credit and savings, and local businesses aren’t able to obtain the loans they need to build their small businesses.

Representative Eric Johnson has enacted legislation in Texas creating Banking Development Districts to help increase access to financial services in the areas that need it most. The legislation allows local governments and the state to seed new bank branches in these underserved areas with deposits from the city treasury. Building on similar efforts in other states, Johnson’s bill allows credit unions in addition to banks to establish themselves in these banking development districts, increasing the projected scale of impact.

In Texas, Rep. Johnson has helped lead the way to implementing a regional approach to water planning. Beginning with local or regional water development planning that is then incorporated into a statewide plan allows those closest to the resources and needs to strike the right balance between competing interests. Changing to a regional approach for deciding the priorities for water infrastructure allows for the needs of private water rights owners, private and public utilities, and government agencies to coordinate their efforts to maximum effect.

Access to a quality education at a young age is one of the most important pathways to future educational and economic success. Unfortunately, funding for such critical pre-k programs is often limited by tight budgets.

Currently, Dallas school districts with students who graduate a year early lose the funding associated with that student’s twelfth year in school. Instead of penalizing a school district for a student who has accomplished their requirements at an accelerated pace, Rep. Johnson initiated a program to redirect those savings to expand the availability of pre-k education. This allows the school districts to invest in education opportunities that have been shown to have important, positive long-term effects on student outcomes.

Representative Eric Johnson has authored legislation to establish more flexible crowdfunding regulation requirements for a specific class of small business development entities that serve historically underfunded businesses. By allowing these businesses to leverage crowdfunding through less intrusive requirements, they can maximize their impact on small businesses and boost the economic impact around Texas.

How to steal this idea:

Learn more about Representative Johnson’s efforts in this article on his crowdfunding bill: http://www.bizjournals.com/dallas/print-edition/2015/02/27/bill-would-tweak-crowdfunding-rules-for-nonprofits.html

Read the legislation he sponsored in Texas: House Bill 1629

In the face of federal inaction, many states are already taking steps to facilitate equity crowdfunding within state lines by exempting from securities laws corporations that use crowdfunding to raise capital. To date, twenty-two states and the District of Columbia have enacted rules to allow intrastate crowdfunding.In Wisconsin, these intrastate crowdfunding rules made it possible for a small business to establish a crowdfunding portal to raise $67,000 in growth capital from just over 50 individuals. Texas can expect to see similar opportunities because we have similar regulations already in place. However, our solution is to go one step further to increase access to capital from crowdfunding by removing barriers to this tool for the small businesses that would otherwise not be able to take advantage of it, especially those in under-developed areas.

For more information on how other states are starting crowdfunding legislation, visit http://www.nasaa.org/industry-resources/corporation-finance/instrastate-crowdfunding-resource-center/

Visit and share the gallery of NewDEAL Challenge winners at governing.com/newdeal.

Currently, very young students in prekindergarten through second grade are placed in out-of-school suspension for minor, disruptive behavior. When they are removed from the classroom, they fall behind their peers. In the 2013-2014 school year, 33,753 Texas children in prekindergarten through second grade received out-of school suspensions. 2,513 of these suspensions were issued to pre-k students. Suspending young children has proven to be harmful and ineffective. Young children who are expelled or suspended from school are about ten times more likely to drop out of high school, face incarceration, and repeat grades. Additionally, African American children, boys, and students with special needs are suspended at disproportionately high rates.

My House Bill 674, now law in Texas, prohibits schools from placing students in prekindergarten through second grade in out-of-school suspension and encourages schools to use alternative discipline methods that keep students in school. This reduces the stigmatizing effects that sending students home for disruptive behavior, even at that young of an age, creates, which studies have shown last through the completion of elementary school, middle school, and beyond. Additionally, the new law encourages districts to utilize alternative discipline methods that focus on positive behavior strategies and keep kids in school.

Good schools can greatly influence the economic vitality of a neighborhood by improving home values and attracting higher income residents. These residents in turn attract businesses and improve the overall economic development of the town. By channeling additional funds to a struggling school, the impact extends far beyond improved test scores, into the overall economic health of the entire community.

Rep. Johnson is proposing legislation to create education empowerment zones that will provide additional funds targeted at struggling schools. These funds would be dedicated to specialized tasks like tutoring and after school programs, school supplies, and technology upgrades and could help ameliorate some of the challenges faced by schools in lower income areas. In order to qualify for these zones, the school district must commit matching funds and would be allowed to retain a certain amount of the state tax revenue from the zone.

Investing for Re-entry Not Recidivism

In order to reduce recidivism and improve ex-offender reintegration, prison systems should partner with private industry to develop Career and Technical Education (CTE) programs for prisoners. By placing a greater emphasis on providing marketable skills we improve the odds that they will successfully reintegrate in society."

Representative Johnson has proposed legislation to increase transparency by requiring law enforcement agencies to report information on officer-involved shootings to the Office of the Attorney General and making this report available to the public so that the data gathered informs research and future policy. One of the biggest things that sets this law apart from other state approaches is the parallel reporting system that tracks incidents in which a civilian shoots a police officer in the course of duty. Additionally, unlike the majority of other state laws, the Texas reporting requirement has a strict reporting timeline for each incident to ensure that the data is gathered and reported in a timely fashion. Finally, keeping track of police officer shooting statistics can help increase transparency and maintain public trust in police officer agencies

In Texas, more than 1 in 3 households lack a savings account. Additionally, roughly half of all Texas households do not have the savings to be able to cover their basic expenses for three months in case of an emergency.