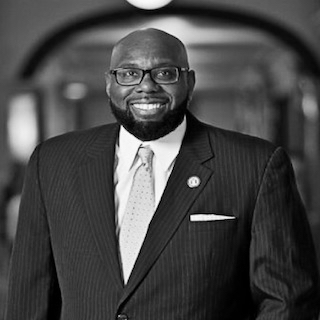 Senator Troy Singleton has devoted his life to public service in government, political, and policy posts at all levels. His rapid rise to the highest levels of management in the New Jersey Legislature and as an elected official is a testament to his widely praised talent for assessing, developing, and implementing clear and pragmatic responses to major public policy challenges. In 2011, he was elected to his first term in the New Jersey General Assembly, representing the over 220,000 residents of the 7th Legislative District. Senator Singleton was elected to the New Jersey State Senate in November 2017 and currently serves as Chairman of the Senate Community and Urban Affairs Committee, Vice Chairman of the Senate Economic Growth Committee, and as a member of the Senate Budget and Appropriations Committee, and Judiciary Committee.

During his time serving in the legislature, Senator Singleton had a significant number of proposals signed into law. His primary focus is on job creation, economic development, domestic violence prevention and expanding educational opportunities for the children of the state of New Jersey. As such, Senator Singleton has received numerous awards for his public service and legislative acumen from business, education civic, labor and non-profit organizations.

Accelerated Career Certification for the Unemployed/Underemployed

The problem is that there is an existing gap between labor and the skills needed to fill positions across various industries. According to McKinsey and Company, 40% of American employers say they cannot find people with the skills they need for entry-level jobs; 60% of American employers say applicants are not prepared for entry level jobs. This law also addresses getting unemployed and underemployed individuals back to work - in New Jersey, according to the US Department of Labor, approximately 9% of our workforce is underutilized, amounting to more than 418,000 workers.

The new law will direct the Commissioner of Labor and Workforce Development, in consultation with the Higher Education, county colleges, county vocational schools, and the Adult Education-High School Equivalency Office, to design and implement a pilot program through which an eligible adult may obtain a career and technical certificate on an accelerated schedule. The law will require the commissioner to ensure that the pilot program includes at least 20 “industry recognized” certificate programs, and that the maximum time to complete a program does not exceed 12 months. The law will also require that each course offered through the program integrates appropriate math, English, career and technical instruction.

Veterans have a higher unemployment rate than the broader labor market. The idea that veterans come home and have trouble finding long-term employment is unacceptable.

My proposal utilizes our tax code to encourage employers to provide work opportunities to those who have honorably served our country. The NJ Battlefield to Boardroom Act would provide a corporation business tax credit and gross income tax credit for qualified wages of certain veterans. These two credits would provide an employer with a credit in the amount of 10 percent of the wages paid to a veteran. The credits may not exceed $1,200 for each qualified veteran per tax year. The bill also contains provisions aimed at preventing potential misuse of the credit, prohibiting taxpayers from simultaneously using the wages or employment of a veteran to qualify for this credit and any other generally available employment incentive that comes in the form of a New Jersey tax credit or grant.

Too often local government lacks an easy outlet for constituents to weigh in on policies that directly affect them. Not having this resource for citizens to get engaged in current legislation hinders the public’s trust in government.

Assemblymember Troy Singleton established an online tool, called Citizen Co-Sponsor, to help gather input from constituents about what programs and policies matter most to them. Through this new tool, residents can offer immediate feedback on any proposals going through the New Jersey State Assembly. By allowing every citizen to engage in the legislative process by co-sponsoring policy initiatives, this tool is helping increase their trust in government.

Supporting Workers in the Gig Economy

New technology has yielded a modern economy that allows greater flexibility for independent contractors, but because many of their jobs do not come with health insurance, retirement plans or paid leave, these workers are more vulnerable than many of their counterparts in the traditional workforce.

This proposal focuses on addressing the changing dynamic of work with a system of portable benefits that would allow those in the independent workforce, to access basic benefits available to workers in the traditional workforce. This safety net will save taxpayers as a whole in the long run while also caring for workers in the new economy.

It is often challenging for local government to balance the need to repurpose blighted or abandoned lots into taxable property, while ensuring an open and transparent process for their approval and scrutiny.

Assemblymember Troy Singleton has advocated for a transparent process for tax abatements that ensures that those finite resources are used judiciously and in the best interests of taxpayers. Singleton proposed legislation requiring municipalities to file copies of tax abatement and exemption agreements with the county chief financial officer and county counsel within 30 days of execution. This will provide a heightened level of public scrutiny over the awarding of these financial incentives. Singleton also proposed legislation requiring municipalities to share certain payments received in lieu of taxes with counties and school districts; informing counties and school district of applications for tax exemptions.