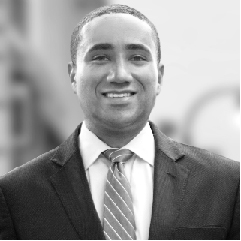 William C. Smith Jr. was born and raised in Silver Spring, Maryland. His parents were young adults during the height of the civil rights movement. It was their struggle and sacrifice that opened doors of opportunity for Will. His parents taught him the importance of a good education and showed him the benefit of living in a caring, engaged community. With the support of his family, Will became a first-generation college student when he attended and graduated from the College of William and Mary. He would go on to earn a master’s degree from Johns Hopkins University and a law degree from William and Mary.

After college, Will enrolled in AmeriCorps where he worked as a community engagement leader for IMPACT Silver Spring and worked at the ACLU as a Legislative Assistant. During law school Will worked at a law firm handling employment discrimination cases and sought a commission as an officer in the U.S. Navy Reserve, a position in which Will continues to serve in today. In 2010 Will received a White House appointment to serve as a Director at the Department of Homeland Security under President Barack Obama.

In 2014 Will was elected to represent District 20 in the Maryland House of Delegates. As a member of the Judiciary Committee, Will served on the criminal justice and family law subcommittee. Along with these roles, Will was a member of several key workgroups including Justice Reinvestment, Law Enforcement Officers Bill of Rights and Death with Dignity.

In 2016 Will was appointed to represent District 20 in the Maryland State Senate, making him the first African-American Senator from Montgomery County. In the Senate, Will has worked to forge relationships with his colleagues from across the state and political spectrum which has allowed him to become an effective legislator in Annapolis. In 2018, Will was appointed Vice-Chairman of the Senate Judicial Proceedings Committee. As Vice Chair, Will champions robust criminal justice reform measures and leads efforts to provide economic and educational opportunities for all Marylanders. Will also serves as the Chair of the Senate Veteran’s Caucus.