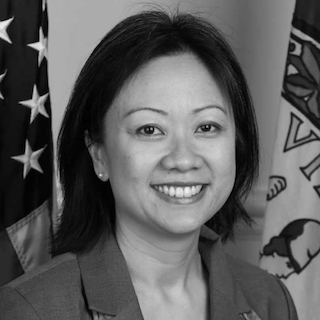 Virginia State Delegate Kathy Tran’s path to being elected begins with her and her parents fleeing from Vietnam as boat refugees when she was just seven months old. Although several other countries offered them asylum, Tran and her family waited 13 months for the United States to accept their application because to them, America represented hope, opportunity, and freedom. Now, Delegate Tran fights for those values by supporting comprehensive immigration reform, investing in workforce and education programs that build strong talent pipelines, and expanding opportunity for veterans.

Since being elected in 2017, State Delegate Kathy Tran has been a powerful advocate for veterans, immigrants, educators, and women in Virginia. Tran has introduced legislation to make higher education in her state more accessible and affordable for those that have served the United States and legislation that gives members of the military stationed abroad the option to vote. The state delegate is also a strong proponent of investing in early childhood education and supporting Virginian educators. She has introduced legislation to leverage private-public partnerships to award grants to K-12 schools for STEAM (Science, Technology, Engineering, Arts, and Mathematics) programming. The state delegate was endorsed by several women’s rights groups during her campaign, and she has followed through by introducing pieces of legislation that aim to eliminate the statute of limitations for misdemeanor sexual offenses and require state contractors to implement sexual harassment training. Kathy Tran shares the title of the first Asian-American woman to be elected to the House of Delegates, and as an immigrant herself, Kathy has expanded services for immigrants by sponsoring legislation to create an Office of Immigrant Assistance