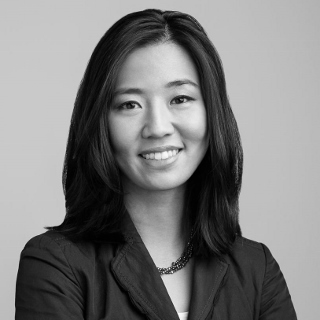 Michelle Wu was elected to the Boston City Council in November 2013 at the age of 28, and is the first Asian-American woman to serve on the Council. In her second term she was unanimously elected as President of the City Council in January of 2016, becoming the first woman of color to hold that role. As a former restaurant owner, legal services attorney, and legal guardian of her younger sister, Councilor Wu understands firsthand the barriers that families and communities face.

Wu was the lead sponsor in Boston's Paid Parental Leave ordinance and Healthcare Equity ordinance prohibiting discrimination based on gender identity -- both of which passed unanimously through the Council and were signed into law by Mayor Martin Walsh. Councilor Wu got her start in City Hall working for Mayor Thomas M. Menino in the Mayor’s Office as a Rappaport Fellow in Law and Public Policy, where she created the Restaurant Roadmap guide, which for the first time outlined in one place the city’s restaurant permitting process from start to finish, and was also a driving force to launch Boston’s food truck program. She later served as statewide Constituency Director in the U.S. Senate campaign of her former law professor, Elizabeth Warren before being elected to office. Michelle Wu graduated fro m Harvard College and Harvard Law School. She lives in Boston with her husband Conor and her son Blaise.